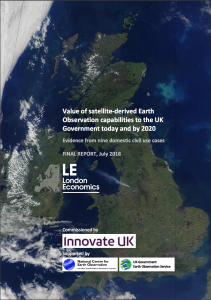 London Economics were commissioned by Innovate UK to evidence the current and near-term potential value of satellite-derived Earth Observation (EO) capabilities to the UK government for civil and domestic purposes.

The subsequent value to industry as a supplier of EO data and applications to UK government is also investigated.

Using a combination of desk-based research and consultations with over 60 experts, the following nine use cases were investigated: Agriculture, Atmosphere, Built Environment, Coastal, Forestry, Flooding, Maritime, Meteorology and Transport.

The following findings stand out: