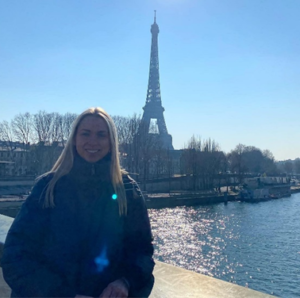 The third edition of our “Staff in Focus” series sees us talk to one of our summer interns, Cera Kenny. Cera joined us this summer for 9 weeks whilst mid-way through her studies at Trinity College Dublin. We talk to Cera about why she applied and what she’s learnt from her experience working at LE. If you are interested in working with us, you can find out more about our current vacancies and recruitment process here.

Why did you take an interest in economics?

I didn’t know anything about economics until I decided to take it as a subject for the Irish Leaving Certificate (equivalent to UK A levels but with six subjects). I had always enjoyed maths and business studies in school, so I thought this was a great combination. At first, I was only interested in the maths part of the subject, like the graphs and formulae, but quickly enough the theory aspect began to grow on me. Taking an economics module as part of my degree reinforced my interest and I realised that numbers and graphs are only useful in the real world if the proper understanding as to what they represent is also there.

Currently, I am studying Management Science and Information Systems (MSISS) at university and while this is not explicitly an economics degree, many of the broad set of skills I’m developing through the course such as coding, mathematics and linguistics are necessary to be a good economist.

Looking at the subject on a larger scale, economists carry out work that affects society as a whole and I love the idea of being able to make a difference beyond a single organisation. I have always been interested in economic equality and I hope that someday, I can play my part in addressing economic imbalances at an international level.

Why did you decide to do an internship?

I wasn’t originally set on taking an internship this summer. My initial plan was to spend three months with friends in Boston! However, I sent in an application to LE in February just to see if there might be an opportunity to intern here. Since the internship was in London, I would still get to spend a few weeks abroad!

While I’ve liked studying economics during my degree, I was interested to see how it worked in the real world. It’s all well and good learning the theories and definitions but if you can’t apply them to real-life then what’s the point? Taking an internship gave me the opportunity to see how economic consultants apply theory they’ve learned to deliver real impacts. For me, it’s important to see and understand these real-life applications or I will lose interest quickly!

What attracted you to LE when looking for an internship?

The long list of practice areas on the LE website caught my eye and indicated that this was a company with a wide range of expertise. I liked this breadth of practice areas because it didn’t limit economic applications to any one context. With teams working on education, behavioural, policy and even space projects, I knew I would get exposure to many fields.

On top of that, the company culture is described as “professional, but also friendly and relaxed”, which was important as I didn’t want the experience to be too formal. The LE office is also in central London, which meant I could move to a cool city for 9 weeks!

What’s been the most interesting project you’ve worked on during your internship?

During my time working with the Space team, I got to do some work for a project on space-based solar power, which assessed the feasibility of generating solar-power from space. If it were to happen, this initiative would help Europe reach Net Zero targets. It was fascinating to see how large-scale concepts like this can be analysed using economics and all the different angles (e.g. societal and environmental) that must be considered in carrying out an analysis. The section I worked on was very forward looking, such as projecting nuclear power capacities up to 2070. It was exciting to be a part of a project that had such a futuristic context and that could possibly make a positive difference to the environment someday.

What advice would you give to girls considering studying economics?

If it’s what you’re interested in, then go for it! During my time at LE, I have worked with incredibly smart people and a lot of them were women. Gender does not come into the picture when someone is carrying out a task, it’s all about having an interest, determination and acquiring the right skills. LE has recently set up a women’s group to promote women in economics and to encourage women to be confident at work.

Let your values and interests determine your career path but never your gender!