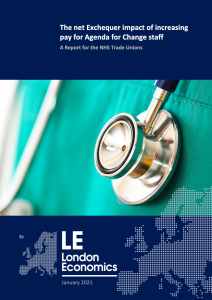 Pay rises are much needed, and long overdue

Corresponding to approximately 4% of employees in England, there are currently just over 1 million nurses, midwives, allied health professionals, and NHS support staff covered by the Agenda for Change (AfC) Pay framework in England. Since 2010-11, pay levels at every single AfC spine point have lagged behind inflation, resulting in a significant decline in total pay in real terms. Most spine points have exhibited a decline in excess of 10%, and total pay on the AfC spine point with the highest incidence of staff (at the top of Band 5) has declined by 15% since 2010-11. This is three times the decline in median earnings experienced by full-time private sector employees across the UK over the same timeframe.

In the first instance, our intention was to undertake this analysis for AFC staff across the entire United Kingdom. However, as a result of limited data availability, to assess the affordability to the Government of potential pay increases for AfC staff, we estimated the net Exchequer impact associated with an illustrative 10% increase in the total pay bill for AfC staff in England (only) in 2021-22. Despite the focus of this analysis being AFC staff in England, the economic benefits accrued by the Exchequer reflect the enhanced spending benefitting all industries throughout the entire UK economy.

The net cost to the Exchequer associated with this illustrative 10% increase in the total bill for AfC staff pay in England was therefore estimated to be £0.66bn. To place this in context, this net Exchequer cost represents approximately 0.075% of total government expenditure in 2019-20 – equivalent to 7½ pence per £100 of government expenditure.

Pay increases for nurses, midwives, allied health professionals and NHS support staff are long overdue, and will result in increased disposable income circulating throughout the economy. This will benefit the many businesses up and down the country relying on a return to normality at the end of the Covid-19 pandemic. Pay increases to approximately 1.1 million public sector employees across the entire United Kingdom will not only address the real erosion of pay and living standards amongst these vital public sector employees, but also provide huge financial support to those businesses and private sector employees in every sector of the economy that the government is currently supporting and most wants to succeed.