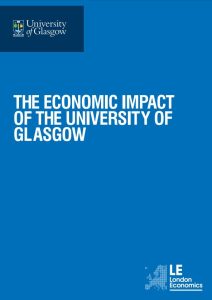 London Economics were commissioned by the University of Glasgow to undertake an economic contribution to the United Kingdom.

The analysis identified that:

Compared to the University’s total operational costs of approximately £757 million in 2018-19, the total impact of the University of Glasgow’s activities on the UK economy was estimated at £4.4 billion, which corresponds to a benefit to cost ratio of 5.8:1. This compares to a 14% increase in the University’s impact of since 2015-16 (on a like-for-like basis, in real terms).

The full report is available here.