In this issue of Space in Focus former Economic Consultant, Nick Oswald, considers the implications of this ever-increasing need.

Humanity’s collective space-faring actions are the predominant cause of the ever-increasing accumulation of debris in-orbit. There is general consensus that this is a ‘bad’ thing. The main causes for disagreements relate to how much of a problem the situation will pose for the development of the burgeoning space economy, and more importantly, what should be done about it[i]. In the meantime, space industry (and even wider) media periodically feature warnings of ‘near-misses’ in-orbit such as the event highlighted in the figure below. Above all one thing is clear however; as the population of objects continues to grow and evolve, we need to get better at keeping track of it. In this issue of Space in Focus Economic Consultant, Nick Oswald, considers the implications of this ever-increasing need. 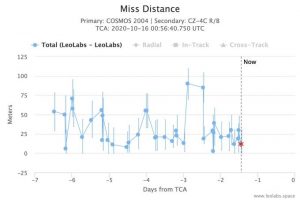 The guests left their junk behind

According to the European Space Agency (ESA) there are over 22,000 tracked objects in Earth orbit greater than 10 cm, and potentially over 100 million pieces of junk of various shapes and sizes,[ii] all travelling at a range of velocities. These range from aimlessly drifting specks of paint from a discarded rocket body or satellite, to explosive particles jettisoned from break up events travelling almost seven times as fast as a speeding bullet.[iii] In essence the problem is clear; even if someone were able to directly control a space vehicle in-situ, by the time they realised one of these high velocity particles was incoming it may already have passed through their satellite, space station or rocket upper stage! From the ground this task would be even harder. Fortunately, sizable debris[iv] at least can be tracked by using ground or in-orbit sensors in advance of a potential collision, and a timely warning issued. If the task of keeping track of tens/hundreds of thousands of pieces of junk were not hard enough however, it seems increasingly probable that there will be vastly increasing numbers of valuable assets in space for the junk to hit. Just two operators, SpaceX and OneWeb, have received regulatory approval to launch around 14,000 satellites in the first part of the decade alone[v]. This represents more active spacecraft than the combined total of over 60 years of space launches.

Expensive ducks in a shooting gallery 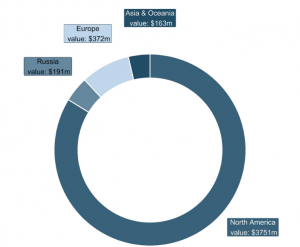 Expert simulations and models of debris populations suggest the highest concentration of debris can be found within certain regions of low earth orbit (LEO), popularised by their usefulness for certain applications (Earth Observation, remote sensing, telecommunications etc). There is an additional accumulation of objects, albeit at a lower density, around other orbits such as geostationary orbit (GEO) situated around the Earth’s equator and favoured by many large telecommunications operators.

Bearing this in mind, the main focus of global debris mitigation efforts is within the busy corridors of LEO. Typically, although satellites populating this region are of a smaller size (and lower original manufacturing cost), the likelihood of a LEO satellite unintentionally colliding with another in-orbit object is considerably higher than for their less dynamic GEO counterparts. In the recent study ‘Commercial Space Surveillance and Tracking Market Study’ London Economics conducted on behalf of the UK Space Agency, we estimated both how likely satellites were to experience collisions in LEO, and the economic value of the resultant damages.

The figure above shows the approximate value of commercial space assets currently in LEO, factoring in depreciation since launch[vi]. As of 2020 there is already more than $4bn worth of hardware that is potentially vulnerable to high velocity impacts, even without valuing the multitude of essential services they provide. This number is set to skyrocket in the coming years as the start of the ‘megaconstellation era’ is already upon us. The chief protagonists on the global stage, namely SpaceX’s ‘Starlink’ and the recently reborn OneWeb constellation, have already commenced their opening acts. 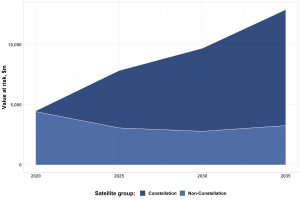 Evolution of value in LEO by type

The chart above displays London Economics’ projections of the evolution of the commercial values in LEO over the next couple of decades, based on current regulatory approval and assuming replenishment of existing satellites. In the next 15- to 20-year period, London Economics anticipate that with the rollout of several tens of thousands of new constellation spacecraft, commercial values in LEO will conservatively total almost $1.3tn. This growth will be largely driven by Starlink and OneWeb and further supplemented by the emergence of new players. One such example is Amazon’s ‘Project Kuiper’, which recently gained regulatory approval to launch its own behemoth constellation by the end of the decade[vii]. The future perspective of orbital space therefore is one of many more objects in-orbit, resulting in greater accumulation of values at risk. Turning attention back to the debris situation, it is abundantly clear that with the combination of ever worsening debris levels, the present status quo is a fragile balancing act which could flip over at any moment.

Many operators are understandably concerned at the lack of a global consensus in establishing an unequivocal, unilateral agreement on debris mitigation efforts. While the current stasis persists however, an offshoot of the commercial space industry has sensed an opportunity to fill the void left by uncertainty and inaction. A small community of providers specialising in the Space Surveillance and Tracking (SST) industry (or Space Situational Awareness/SSA as it is known in North America) have taken note of industry trends and are steadily building up capability and capacity to profit from the situation. This objective would be no mean feat however, given the present scenario of freely available orbital reference data. This is courtesy of the US military’s 18th Space Control Squadron, who also issue periodic conjunction warnings to at-risk satellite operators. In what is currently a relatively monopolistic market in terms of conjunction analysis services, such firms are banking on the need for greater accuracy and reliability of tracking data in the near future, with the added-value provided by such services convincing users to part with their cash. Indeed, while this is currently a relatively small market, London Economics analysis found that the value of the conjunction warning market alone could exceed $50m within the next two decades.

Alongside the conjunction services market sits a broad value chain of firms operating within the SST marketplace who are similarly targeting revenue growth. The wider composition of this industry can be loosely categorised as per the illustration below:

The clarion call to action was issued by ESA[viii] and the US government[ix], with their most recent (pre-COVID-19) annual budget offering sizable funding towards SST/SSA efforts. Specialist suppliers such as LeoLabs have stepped forward as the pioneers of the SST gold rush, notably winning a $15m contract from the US government to provide enhanced space surveillance services.[x] LeoLabs have also made strides into the commercial market following a tie-up with SpaceX for assistance with tracking the rollout of their new spacecraft.[xi] Indeed, the ramping up of fiscal budgets has also prompted some interconnected sub-industries to chase a piece of the pie; the first non-demonstration debris removal mission by Swiss start-up ClearSpace was recently green-lit by the ESA to the tune of €86m[xii]. This was hot on the heels of Japanese head quartered “space sweepers” Astroscale recently announcing a $191m Series E funding round completion for their debris removal operations. With sizable sums on offer for new enterprises, how far can the new ‘gold from trash’ industry progress?

SST enables the evolution of the Space Economy

With the landscape of orbital space set to evolve rapidly in the near future, a variety of complementary services are anticipated to emerge to meet the needs of space users. Some of these developments are already underway, however some exciting prospects for the space ecosystem include:

Recent media has featured reports of ‘near-miss’ type events in orbit involving close passes between defunct satellites and discarded rocket upper stages, as well as between active spacecraft, highlighting the very real and apparent risk of potential collisions in space. Drawing parallels from related industries such as aviation or maritime, it could take a widescale disaster such as Deepwater Horizon to drive real meaningful regulatory changes within the space industry.

With or without such a calamity, humanity currently has its hands full battling another scourge much closer to home in terms of the COVID-19 outbreak. With space assets demonstrating their usefulness on this front[xv], the next battleground for humanity in a spacefaring context will be to ensure safeguarding of these systems. Enhanced SST data and capabilities provide another useful shot in the arm to bolster resilience to debris disaster, which could prove lucrative to boot.

Nick Oswald, the author of this piece, has left London Economics, but the team remains immersed in the SST domain. For more information please contact Romain Esteve at [email protected].

[iv] i.e. anything 10 cm wide or larger for most sensors; some services advertise even as small as 2 cm (see https://www.leolabs.space/radars/)

[vi] Note: the true value of all satellites would be considerably higher factoring in governmental and civil spacecraft, the value of which is less tangible compared with private assets